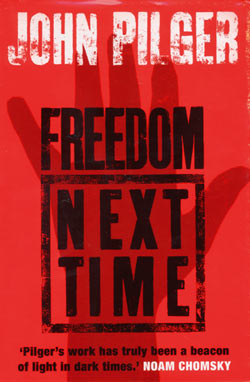 The wider perspective of world history, and the recycled lies it can reveal, is scarcely visible in the mainstream media. John Pilger is a rare beacon. And the longer he keeps writing the more he can draw on his rich personal experience, which reaches back to Vietnam and beyond.

He looks ‘the true consequences of modern imperial power’ in the eye. But his greatest gift is for taking the reader into the extraordinary lives of ordinary people, conveying in this book once again the feel and look of places as distinctive as South Africa, India, Palestine and Afghanistan. Among contemporary writers, perhaps only he could weave from the story of the Chagos Islanders a compelling and deeply lamentable allegory of our times.

It is this quality, even more than the meticulously scoured archives or excruciating official interviews – a brief encounter with the toupee of US diplomat John Bolton is a classic of its kind – that keeps John Pilger’s voice fresh and free from the pitfalls of self-referential reporting. The title of this book applies most obviously to South Africa, where the defeat of apartheid has exposed the neoliberal orthodoxy behind it, which remains intact.

But perhaps the most devastating account comes from Afghanistan, where the President lives with 40 US military bodyguards, the warlords run a revitalized opium trade, venal plans for an oil pipeline are on the table again and the much-trumpeted ‘liberation’ of women is invisible. He never leaves room for serious doubt, however, that there will indeed be a next time – and, with any luck, he will be there to report it.

This article is from the November 2006 issue of New Internationalist.
You can access the entire archive of over 500 issues with a digital subscription. Subscribe today »